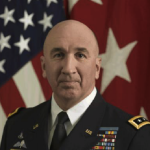 Lieutenant General Michael D. Barbero was Director, Joint Improvised Explosive Device Defeat Organization. He was responsible for leading the Defense Department’s actions to rapidly provide counter-IED capabilities in support of combatant commanders, military services and other federal agencies to enable the defeat of the IED as a weapon of strategic influence.

In addition to infantry assignments at the tactical level, he has commanded at every grade, from lieutenant colonel to lieutenant general. He commanded the 3d Battalion, 187th Infantry Battalion in the 101st Airborne Division and the 2d Brigade, 10th Mountain Division. As a brigadier general, he commanded one of the Army’s combat training centers, the Joint Readiness Training Center and Fort Polk, Louisiana. As a major general, he commanded the United States Army Infantry Center and Fort Benning, Georgia. Immediately prior to joining JIEDDO, he commanded the Multi-National Security Transition Command–Iraq and NATO Training Mission–Iraq.

Other staff assignments include service as the executive assistant to the commander of Joint Forces Command/Supreme Allied Commander Atlantic, the Deputy Director for Regional Operations on the Joint Staff and the Chief of Staff, III Corps and Fort Hood, Texas.

Lieutenant General Barbero has served nearly four years in Iraq over three separate tours. During the first year of Operation Iraqi Freedom, from 2003 to 2004, he served as the assistant division commander of the 4th Infantry Division. He next served in Iraq as the Deputy Chief of Staff, Strategic Operations at MultiNational Force–Iraq during “the surge” in 2007 and 2008. Finally, during his most recent deployment, from 2009 to January 2011, he was responsible for the training, equipping and development of all Iraqi security forces and building the ministerial capabilities of both the Ministries of Interior and Defense, while serving simultaneously as the Commander of Multi-National Security and Transition Command–Iraq and the Commander of the NATO Training Mission–Iraq.

He also deployed to Panama and participated in Operation Just Cause in December 1989.