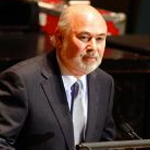 Jonathan Granoff is an author, attorney, and international peace activist. His life’s work is devoted to the total elimination of nuclear weapons worldwide. To that end, he is current president of the Global Security Institute, a nonprofit organization committed to the elimination of nuclear weapons. He also serves as the senior advisor of the American Bar Association’s committee on arms control and national security and as the vice president of the NGO committee on disarmament, peace and security at the UN. He holds positions on numerous governing and advisory boards including the Lawyers Committee on Nuclear Policy, the Lawyers Alliance for World Security, The Jane Goodall Institute, The Bipartisan Security Group, and the Middle Powers Initiative. Mr. Granoff has lectured worldwide emphasizing the legal, ethical and spiritual dimensions of human development and security, with a specific focus on the threat posed by nuclear weapons.